You may remember a few weeks back I spent a brilliantly fun (if rather nippy!) morning in the Ton, making this most awesomemous of lanterns for the Burning the Clocks parade, with the lovely Same Sky folks: 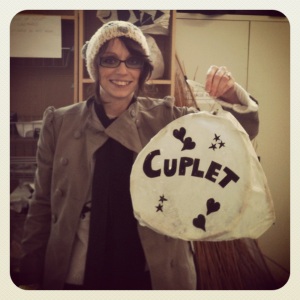 Ah yes, it’s all coming back to you now isn’t it.  Good.  That means I don’t have to go over everything again :).

Having successfully managed to get home safe and sound, no mean feat given the ridiculously packed streets and reliance on public transport (the husband selfishly had the car up the North), lantern and I excitedly waited for the big event.  I even made another lantern at home the day before, so the husband could join in too.  Alright, maybe it’s because I enjoyed getting all messy with the glue and stuff, but shhhhh, don’t tell anyone… 🙂

Finally the day of the parade arrived, so we bundled all our stuff in the car, and headed to the coast.  I’d been a bit keen to do other things on our mini-break to the Ton, and had booked tickets to Spamalot on the same day as the parade.  Turns out the turnaround time for the play finishing and the check in time at The Corn Exchange was tighter than I had figured, meaning the lanterns had to come with us to the theatre – oops!  Oh well, as it was, they had a very nice time thank you very much. They particularly enjoyed the bit with the cow :).

Hot footing it from the theatre, lanterns in tow, it turned out we were one of the first to arrive.  In fact, safety check central was still being set up as we rolled in all excited and babbling (ok, yes, it was just me that was like that.  Husband is much more laid back).  But this gave the super smiley Same Sky helpers a great opportunity to practice their stick distribution skills – workshop lanterns were given poles with battery-operated bulbs attached; homemade lanterns had a purist pole (no attachments needed here thank you very much).  Team Cuplet had one of each, so really it was a very carefully thought out plan.  Yeah.  That’s what it was.  It was all part of my plan… And by lovely coincidence, the next lantern holders to arrive were the family I had Cupleted at during the workshop a few weeks earlier, and we spent the rest of the parade together :).  A big well done to Pete, their four year old son, for being a proper little trooper and managing to walk almost the entire route after what was a very long evening of waiting around for someone so young.  In fact, he danced his way round the first part of the parade – what a star!

Right, I feel I’m starting to waffle on, so I’m going to let my photo’s of the evening do the talking for a bit now…

Burning the Clocks was AWESOME!  Somehow we managed to be right at the front of the general lanterns section, tucked just behind the offerings of Brighton University – painfully talented as you can imagine.  The students that is, not us, just to clarify :). We spent the whole evening flanking an absolutely stunning Phoenix, being carried by two teeny teenage girls.  It looked bloody heavy to me, so well done to them for getting it round!  I did my bit to help them out, unwrapping sweets they had been given by other paraders and popping them in their mouths for sustenance.  I mean, lovely thought guys, giving them sweets and all, but they were carrying a huge lantern in both hands – how were they gonna unwrap sweets with their hands full, let alone eat them!?!   The parade was packed, with gorgeous glowing works of art trailing behind us as far as the eye could see.  But that was nothing compared to the thousands of people lining the streets to watch us all as we passed by, on our way down to the beach where our lanterns made their final journey to the bonfire.  What a sight it was.

It was an incredible evening, so much fun, and really quite amazing to see an entire community come together.  Well done Brighton!  And huge praise to Sharon and everyone else at Same Sky for organising such a  fantastic event; I feel so pleased to have been a part of it :).  But sadly, due to outrageous budget cuts to the tune of £90,000, Burning the Clocks may not even happen next year :(.  It’s such a shame when local community based events like this disappear into obscurity merely as a result of what people in positions of power deem to be unimportant or non-essential. If anything, being a part Burning the Clocks this year, particularly as an outsider, showed how much Brighton and Hove care about projects like this.  Certainly my home town doesn’t have anything like this, and its all the poorer for it in my opinion. Ok, I’ll get off my soap-box now (I get a little carried away sometimes, in case you hadn’t noticed), and will end with this.  Burning the Clocks was awesome!  Paraders and spectators were grinning from ear to ear, and I haven’t seen so many people having so much fun all at once for a long, long time.  I hope it’s around for many years to come :).